Clark Regional Emergency Services Agency (CRESA) will open its doors to the public during its annual CRESA Community Expo from 11 a.m. to 2 p.m. on Saturday, Sept. 12. The event will take place in downtown Vancouver on 13th Street, between Franklin and Ingalls Streets.

Activities planned for children of all ages include face painting, button making, games, and exploring emergency vehicles—in addition to meeting firefighters, police officers, search-and-rescue dogs and horses. Kids can stop by the information booth to receive a passport on which they can collect stickers. Local businesses like NW Natural Gas, Corwin, and Frito Lay have generously donated hot dogs, chips, and beverages available for free to attendees (while they last, that is!).

Enjoy a demonstration by the Sheriff’s K-9 team or learn hands-free CPR. The local SWAT team, firefighters, and members of search-and-rescue groups will all be on hand. Explore the latest in public safety vehicles, including an armored personnel carrier, a heavy rescue vehicle, fire engines, ambulances, and police command vehicles. Tour the 9-1-1 center and see dispatchers in action taking emergency calls, get a sneak peek inside the workings of CRESA’s Emergency Operations Center, and talk with Homeland Security representatives, a National Weather Service meteorologist, and amateur radio technical experts. For more details, visit cresa911.org.

On Saturdays, June 6 and June 13, you can “park” for free in honor of National Trails Day (June 6) and National Get Outdoors Day (June 13). On these two days, the day-use fees will be waived for all local trails and in national parks. These are only two of the six fee-free days offered by the Pacific Northwest Region of the U.S. Forest Service during 2015. The remaining fee-free dates this year are Sept. 26 (National Public Lands Day) and Nov. 11 (Veterans Day).

National Trails Day on June 6 encourages people to hike on their National Forest trails Saturday, and to volunteer to help keep them maintained and enjoyable for everyone. V isit www.americanhiking.org/ntd-events for volunteer opportunities.

The fee waiver applies to day-use fees at U.S. Forest Service recreation sites in Washington and Oregon, and the many trails in nearby Gifford Pinchot National Forest. This includes many picnic areas, boat launches, trailheads and visitor centers. Concession operations will continue to charge fees unless the permit holder wishes to participate. Fees for camping, cabin rentals, heritage expeditions, or other permits will not be waived.

Above photograph: a springtime view of Mount St. Helens. See more when you visit the The Forest Service-Gifford Pinchot National Forest Facebook page.

Gifford Pinchot National Forest and local partners are hosting three free fishing events for kids and families. The closest event is at Merwin Park from 9 a.m. to 1 p.m. on Saturday, June 6: the Mount St. Helens Kids’ Fishing Derby, where 1,500 rainbow trout are waiting to be reeled in by kids.

Fishing Derby events include fishing, a parade, storytelling inside a 40-foot-long inflatable salmon, face painting, make-your-own volcano, Gyotaku-Japanese fish printing on tee shirts, an aqua-aquarium, and information on water and boater safety. Everything is free, including lunch. Fishing rods and tackle will be available for kids to borrow and volunteers will be on hand to show kids how to fish. Fish cleaning will be provided. No need to register in advance; just show up. Call 360-449-7800 for more information.

Kids age 14 and under can fish year-round without a fishing license but teens and adults aged 15 and older must carry a Washington State fishing license while fishing. All state fishing regulations must be followed during these events. Washington freshwater sport fishing rules can be viewed at http://wdfw.wa.gov/fishing/washington.

Or check out this page of the Washington State Early Support for Infants & Toddlers Contact Directory: http://www.del.wa.gov/publications/esit/docs/ContactsDirectory.pdf

SELF—a network of resources to serve the needs of children aged birth to 5, families, providers, and the community at large

Women, Infants, and Children (WIC)—a federal program for low-income women, and children up to age five who are at nutritional risk

The Inn at Crippen Creek Farm — in my favorite town of Skamokawa — is offering a Beginning Artisan Bread Baking class on April 12, starting at 11 a.m. Folks will learn to make a master dough for focaccia, pizza and baguettes. The cost is $50 per person and includes pizza for lunch. I’ve had Don and Kitty’s pizza — believe me, this alone is worth the price.
Other classes are available too. Check out the schedule and registration info.

Participants are sure to get a rise out of this experience. Heh heh. 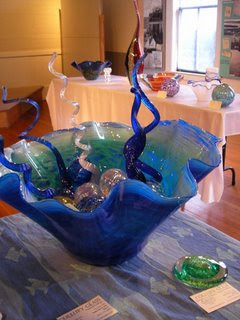 I’m feeling it again, the love for a little town called Skamokawa in Wahkiakum County that I wrote about for the last issue of North Bank.

Courtesy of Don and Kitty Speranza of the Inn at Crippen Creek Farm, I just came across a great blog that’s been around for quite a while, called Skamokacentric. The postings are few and far between but the community links feature local musicians, artisans, bakers, B&Bs, eateries and on and on — all the great stuff that drew me out that way to begin with. Can’t wait to go back.

The photo above, taken by Kathleen, the blogmaster of Skamokacentric, is from an art exhibit going on right now at Redmen Hall. Skamokawa glassblowers Kyle Gribskov and Treasure Collupy will exhibit their work during through next month. The exhibit is open Thursdays through Sundays, in the afternoons.

It’s so beautiful in Wahkiakum, you could drive off the road staring out the window.

Just after the floods swept through southwestern Washington, I headed to Wahkiakum to research a story for the excursion section of the next North Bank magazine. I had been calling for a couple of days; the lines were cut off. Folks in the county could only call each other and no one could call in or out.

I got through to a few of the B&B’s I wanted to visit only by email. I got my first taste of eastern Wahkiakum hospitality in this response from Don and Kitty Speranza, Portland expats who built The Inn at Crippen Creek Farm outside of Skamokawa. I had asked her if shops would be open after the chaos of the week before and Kitty, of course, offered to check for me. Here’s a snippet. So lovely.

“I do think that most of the shops will be open. I would be happy to check for you on that. I could make a few calls. Let me know if you would like for me to do that. There are not a lot of shops but I do not think you would be disappointed to visit our area. It is a wonderful place, off the beaten track.

Also, I would be happy to contact the other B&B’s in Skamokawa and the area if you are unable to get them by phone. Some of them are also without email.”

This was a little bit how my whole day in the county went. Folks would recommend I get over to some place or another and then just pick up the phone to check on open hours for me. Rob at Stockhouse’s farm got on the horn with the River Rat Tap and I ended up having a very satisfying plate of fish and chips there; and Kitty and Don sent me over to Trillium Books.

Seemed like the day moved at a pace determined by Wahkiakum itself, and folks all had some kind of unspoken agreement on what’s what. Rob and Diane’s Puget Island farm and guest cottage seemed to be where all roads led, and my favorite thing happened right in their living room.

Earlier that day, Tanja over at the chamber insisted I chat with Richard Erickson, the EDC director, even though I really wasn’t prepared for a formal interview. Well, Richard turned out to have all this great perspective. We had a short, informative chat, and went about our days.

Several hours later, I find myself lingering in Rob and Diane’s living room over a cup of tea, when a car drives onto their property. The dog starts barking and Rob pops outside. Turns out, it’s Richard, showing around the area’s new prospective physician, and the Stockhouse’s farm just happened to be on the tour.

We greeted each other with a laugh, and I somehow felt like he knew I was going to be there. They broke out a bottle of wine, and I headed to the Rat Tap.

So what I hear is that folks don’t like long blog entries so I will put a period on it. More soon, and more on North Bank itself. Stay tuned and watch for the magazine Feb. 22 with all sorts of Wahkiakum goodness.